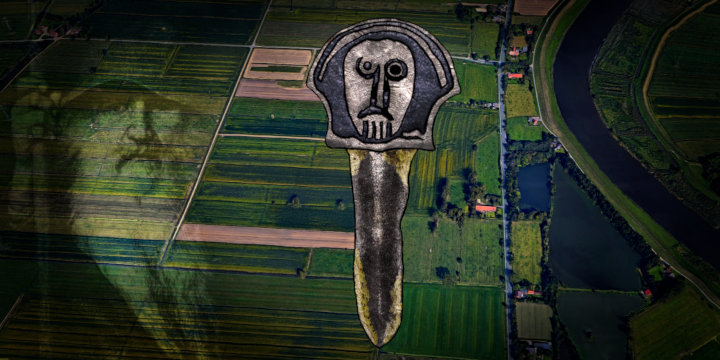 Northwest of Bremen, where the river Hunte leads into the Weser, lies the town of Elsfleth (see map in fig. 1), which has been attracting attention among archaeologists for several years. There, on an inconspicuous field in the area of the former embankment wall of the river, interesting finds have been made at regular intervals for quite some time. In addition to a large quantity of pottery, it is the countless metal finds that characterize the site called “Hogenkamp”.

One of the most remarkable finds is a silver-gilt tongue of a belt buckle, which is decorated with a depiction of a face (see fig. 1). At first glance nothing seems to be very special about it. Belt buckles with such a shield-like, decorative base are not uncommon. They are known from numerous Frankish burials around 600 CE (respectively 10.600 HE) and are often decorated with images of faces and masks.1 In general, mask motifs are considered to have an apotropaic function (i.e. warding of harm and evil influences) and it is therefore not surprising that such belt buckles are often found in warrior graves.

The earliest examples of this group of motifs probably come from pagan or syncretistic contexts and are often found on metal objects in Germanic animal style I. However, since these mask motifs were continuously used in the Frankish empire even long after their Christianisation, a reinterpretation of this symbolism towards a Christian image of protection and salvation is often assumed. Hence, the function stays the same.

What makes the specimen from Elsfleth so special is a small but crucial detail: the left eye of the face is missing and that is not by chance due to the poor preservation in the soil! A microscopic close-up of the eye area shows that the black niello filling, which is still present in the right eye, was carefully removed using a very fine tool. 2 A conscious redesign that seems to suggest an affiliation with the one-eyed Wodan-Odin. However, the loss of his eye is mentioned only in the later Old Norse written sources,3 which are several centuries younger than the find from Elsfleth.

Explicit depictions of the Æsir are generally very rare in Germanic art. The earliest and most substantial imagery stems from Migration Period gold bracteates which were produced around the decades before and after 500 CE (cf. fig. 2). Among them there are some illustrations, which can be connected with Wodan with some certainty. However, the figures depicted on them are always shown in profile. Therefore one can only see one eye at a time, which makes it impossible to verify his one-eyed-ness.

From 2015 to 2017, the site and the surrounding area of the Elsfleth find were thoroughly examined by archaeologists for the first time, including small-scale excavations.4 During these archaeological activities, crucibles and slags were found, which confirmed the suspicion that a workshop for non-ferrous metal processing was located on site.5 This exciting discovery is of great importance for the interpretation of the find: It appears that this Frankish belt buckle was deliberately redesigned in an Old Saxon non-ferrous metal workshop in order to meet the pagan taste of the local population (i.e. the potential customers): with an image of Wodan!

It goes without saying that in prehistoric and early historical contexts one is always well advised to exercise a certain amount of caution and restraint; especially when connecting archaeological finds with literary sources. In the case of the Elsfleth specimen, however, there are good reasons to believe that it could actually be a representation of Wodan. First of all, there is this deliberate, very careful removal of the left eye, which was apparently carried out in the context of a workshop area. In addition, transforming a presumably Christian image of salvation into a depiction of Wodan is pretty conceivable, since in Old Saxony there is some evidence of the close connection of Wodan with the healing and protective aspect, thanks to the second Merseburg charm as well as some gold brakteate motifs (cf. fig. 2).

The other point is the larger geographical context of the find: Elsfleth is undoubtedly a part of the Old Saxon homeland, which at the time of the find (around 600) was still very much pagan. In fact, for centuries Old Saxony had been a bulwark of paganism against the ever-expanding Christendom and thus it ultimately shielded Scandinavia from this expansion. The relationship with the Frankish Empire was tense and marked by wars and conflicts, but also with peaceful trading. One way or another, many Frankish trade goods reached Old Saxony, which up to the beginning of the 9th century was able to defend its cultural and religious independence from its powerful neighbor. For this reason, it is not difficult to imagine that there was a desire to modify Frankish products according to their own Saxon taste. That the heathen Saxons and their Frisian neighbors 6 held Wodan in high esteem is known from numerous written sources. His one-eyed-ness, though it is only explicitly mentioned in later Old Norse sources, is most likely one of his oldest attributes, for which there are also Indo-European parallels.7 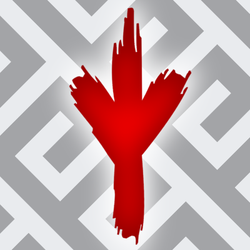